This is one of the most complicated hats I've crocheted so far.  This is my own design, is very detailed and labor-intensive yet so worthwhile.  As for the color, I chose off-white yarn because it's the only color I felt most closely matched Elsa's platinum blonde. 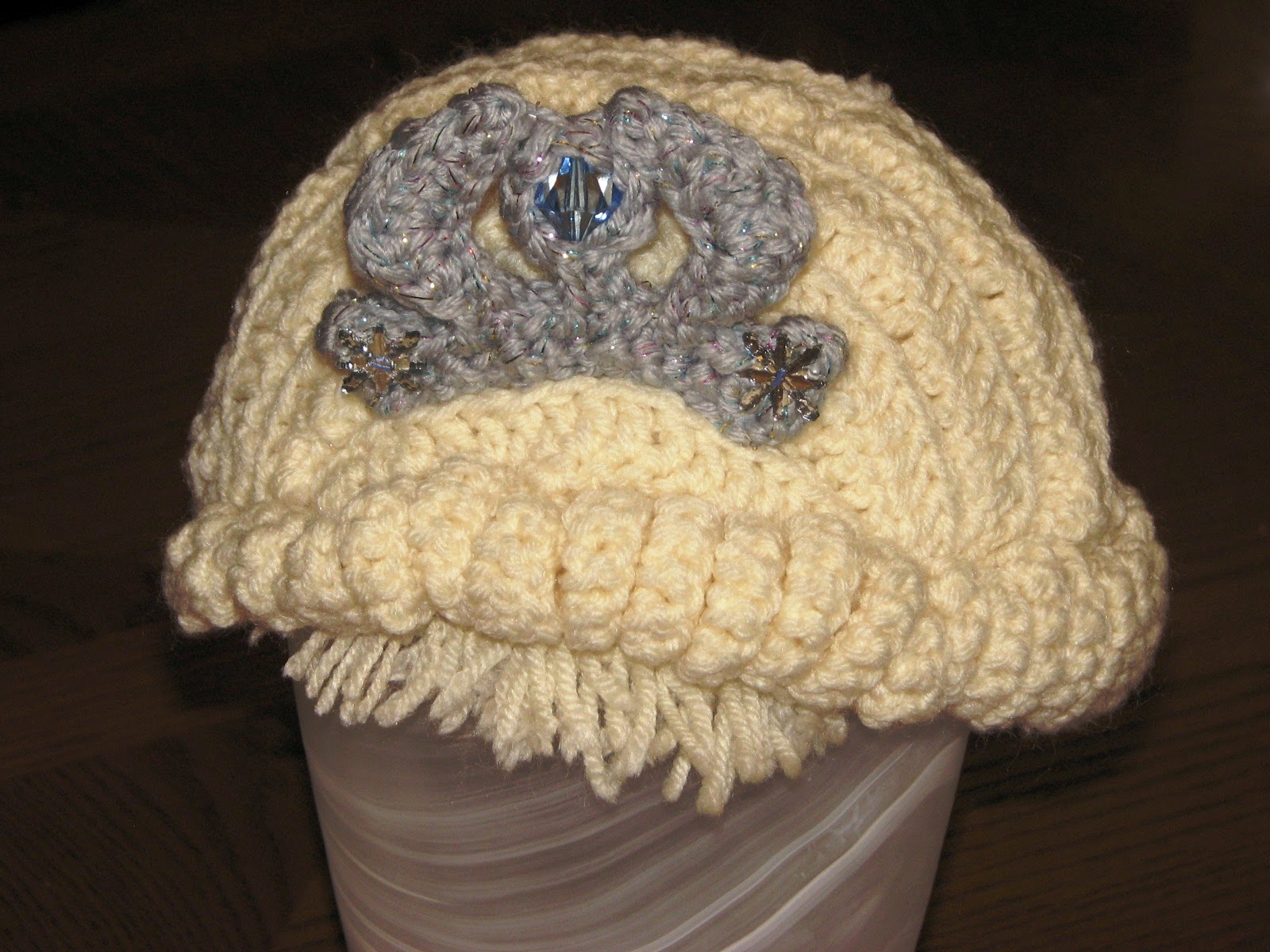 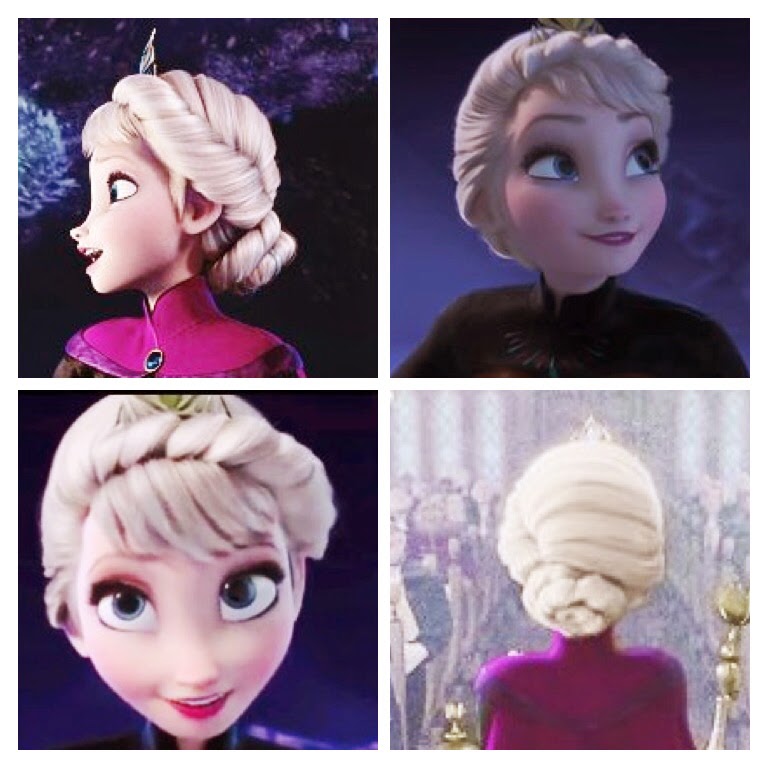 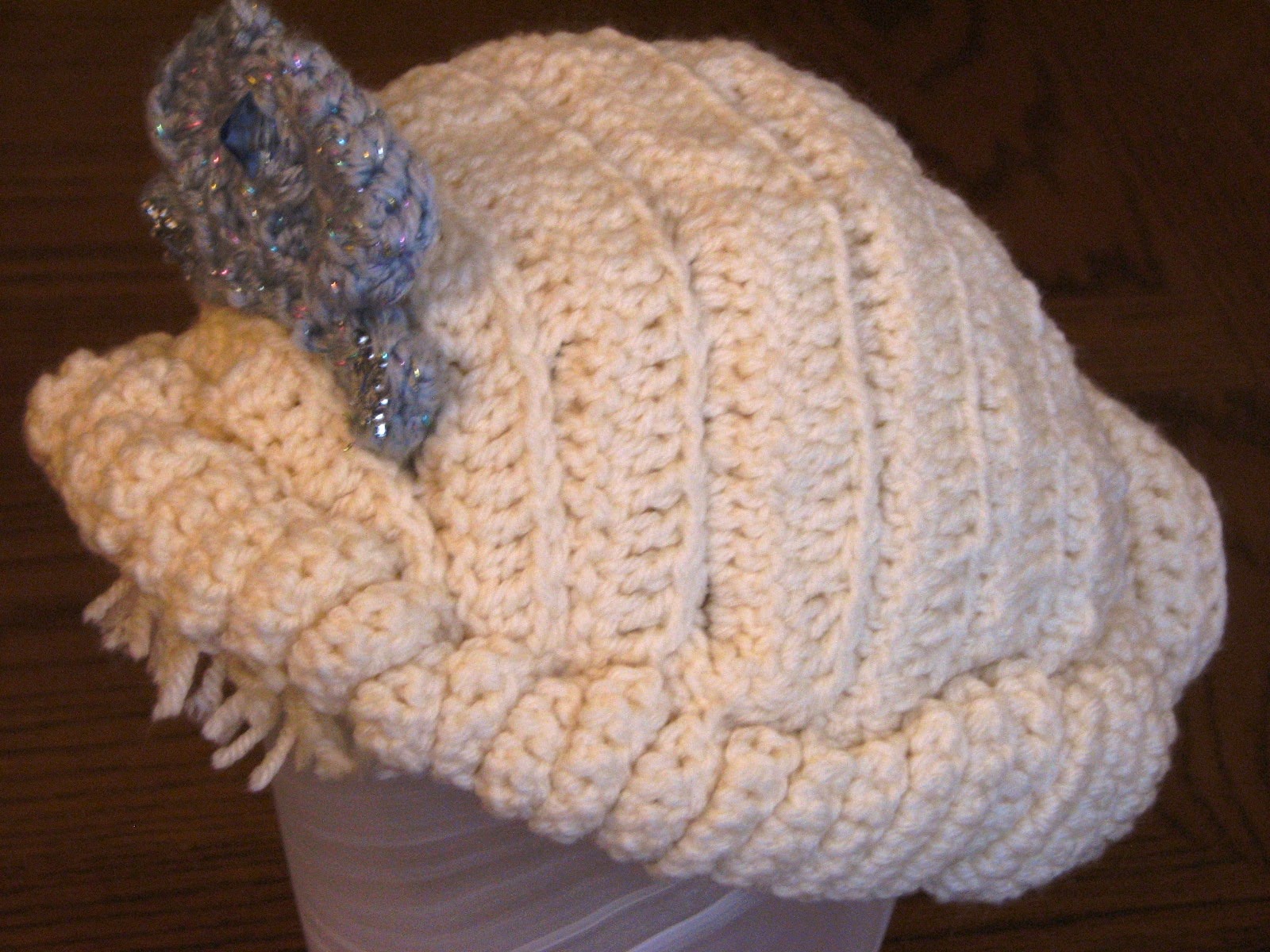 I created the hat by crocheting a beanie cap as a base and then crocheted the textural elements atop the "blank slate" beanie.  The hat actually has two layers now because of this, so that makes it not only texturally interesting but extra warm as well.  Then I carefully crafted the best resemblance of Elsa's side twist and bun that I could do using yarn.  Both the twist and bun are secured in place on the hat. 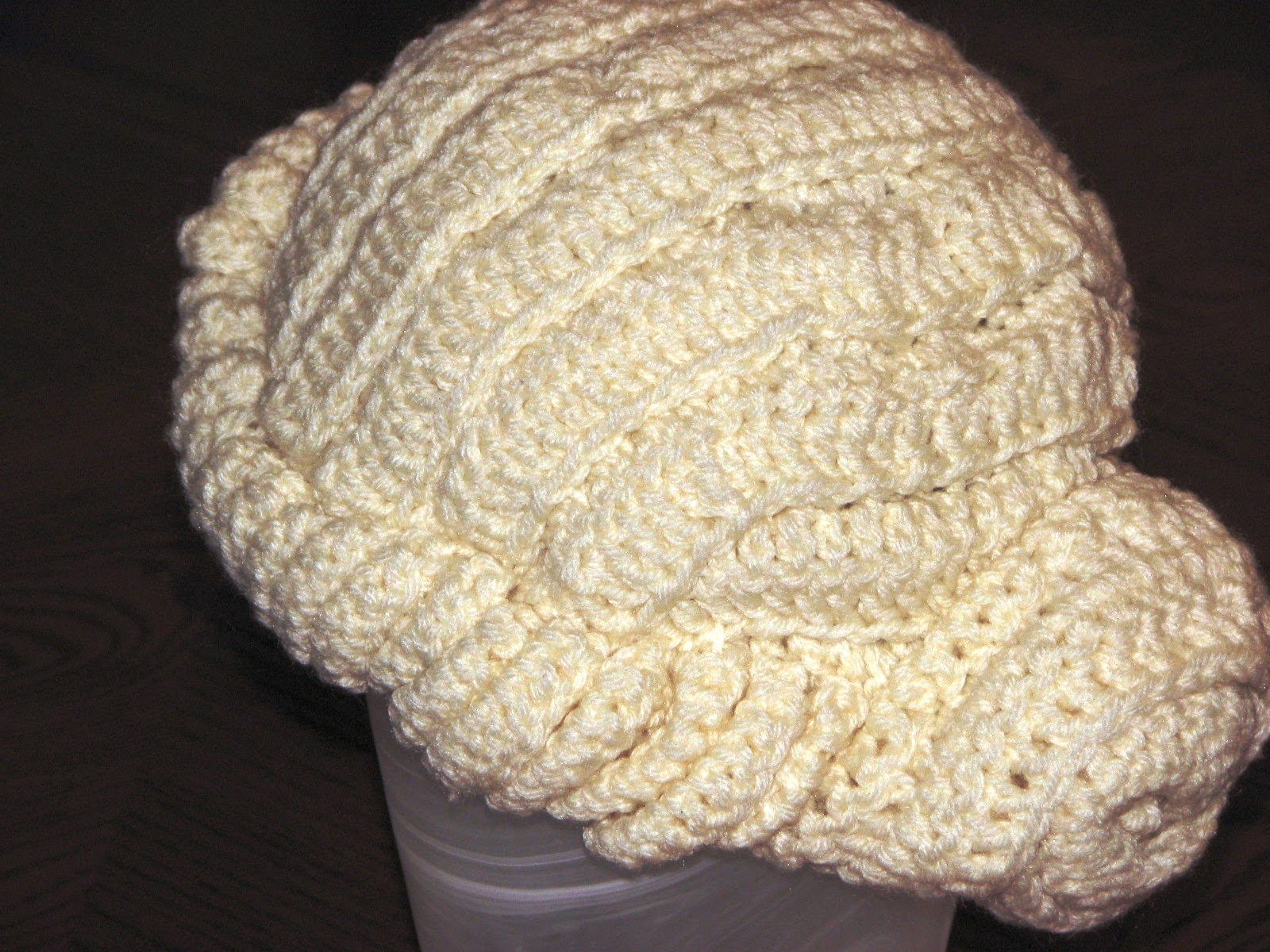 The crown was crocheted using this FREE pattern.  For anyone who wishes to use this pattern in the future, there were a few problems with the way the pattern was written, but I figured it out.

The first crown didn't turn out so well.  Because I didn't have gold (and I mean sparkling gold) yarn, I had the bright idea to use the same yarn as the hat and then paint it with gold fabric paint.  After 24 hours of waiting for the paint to dry and crossing my fingers that it would work, it ended up in the trash.  So off to the craft store I went in search of a different color/material... 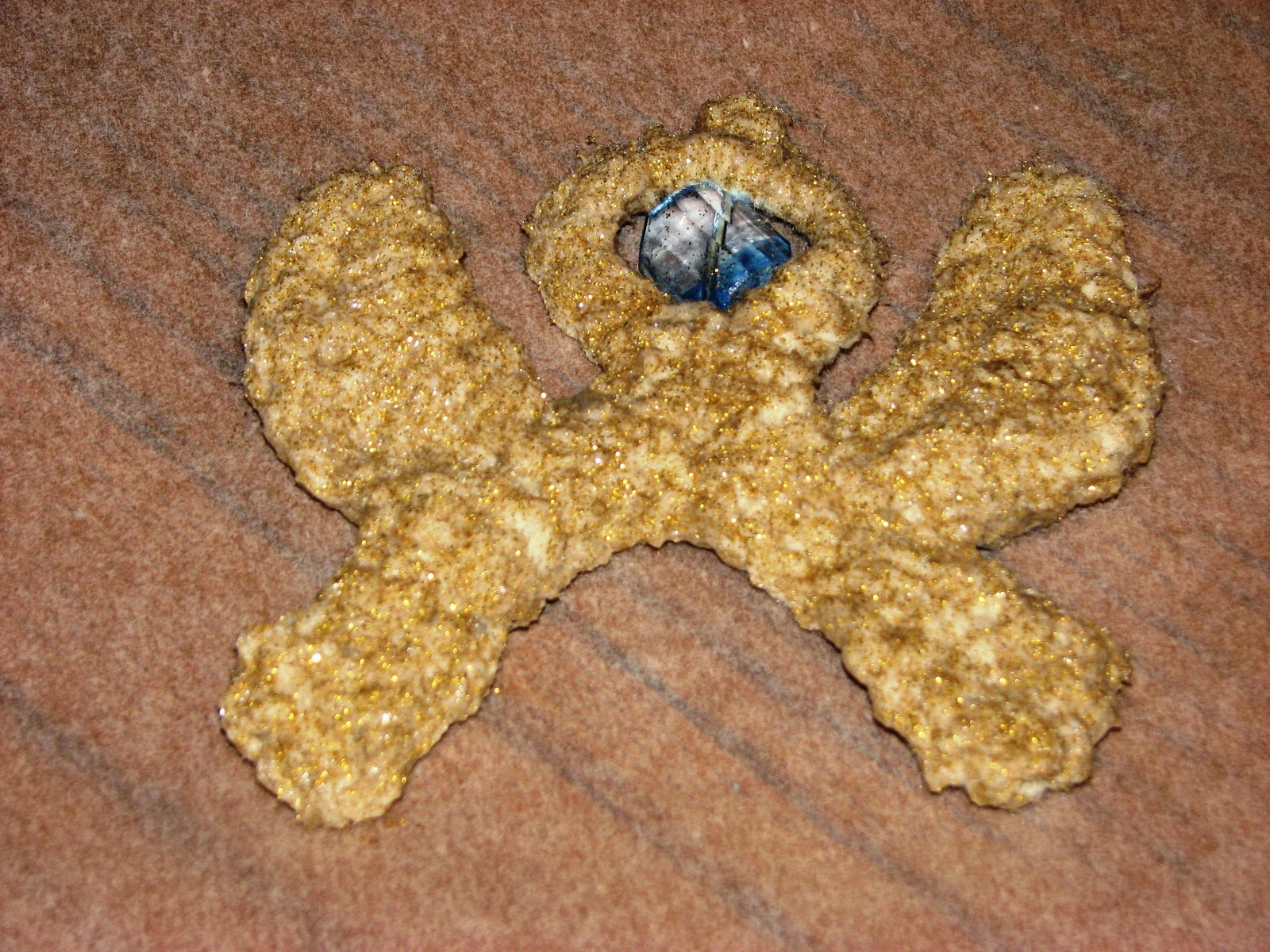 The yarn I used for the second and final attempt was a pewter-blue color with multicolored sparkling threads throughout (Caron Simply Soft Party in Silver Sparkle).  I sewed a blue gem into the center loop of the crown and two shiny snowflake buttons on the bottom and then attached to the hat. 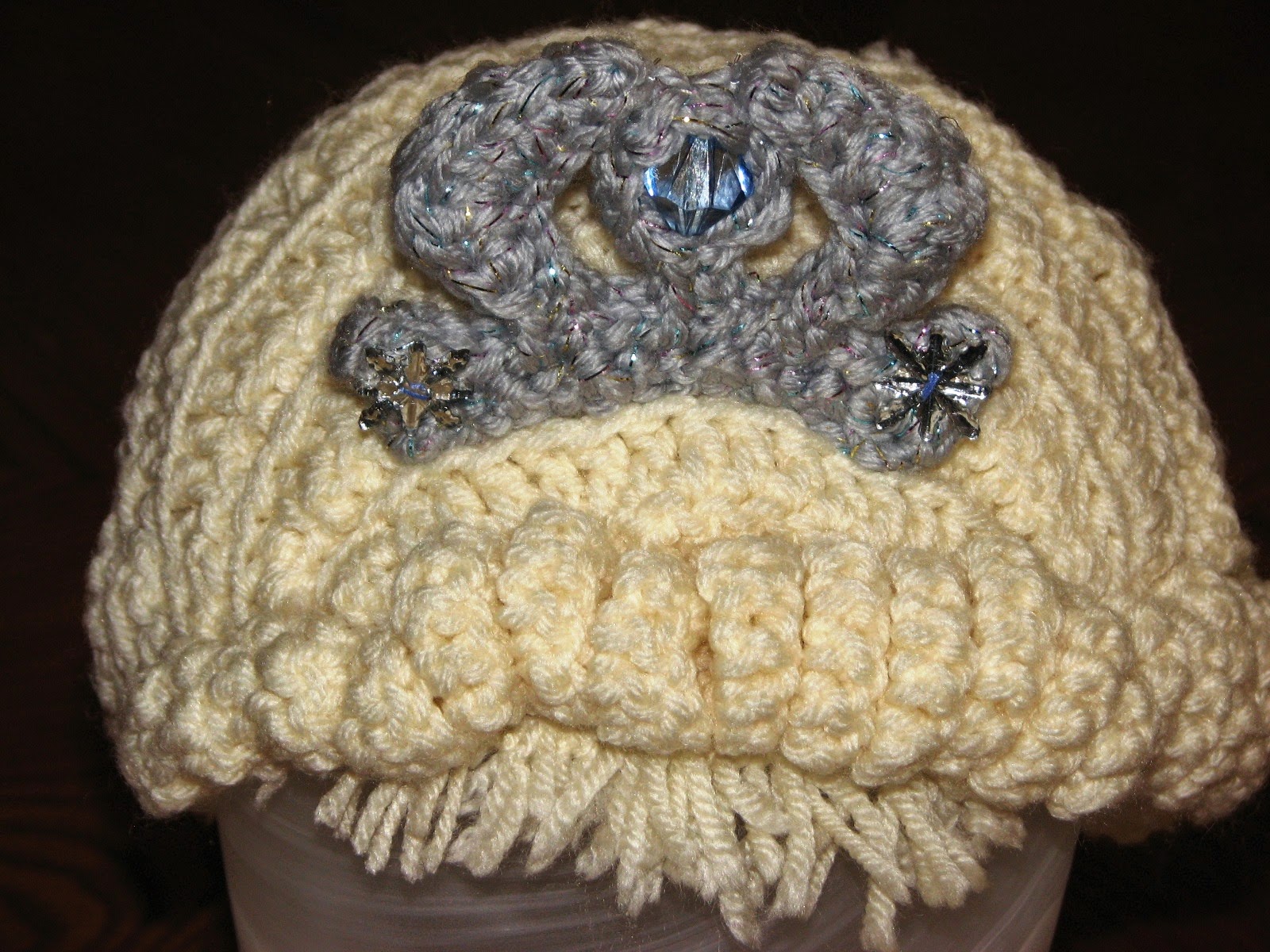 Visible in the below photo is the 1/2-inch brim along the bottom of the hat.  This helps secure the hat to the head and keep any hair tucked underneath if using for costume purposes. The brim can be worn exposed over the ears or tucked under per your preference. 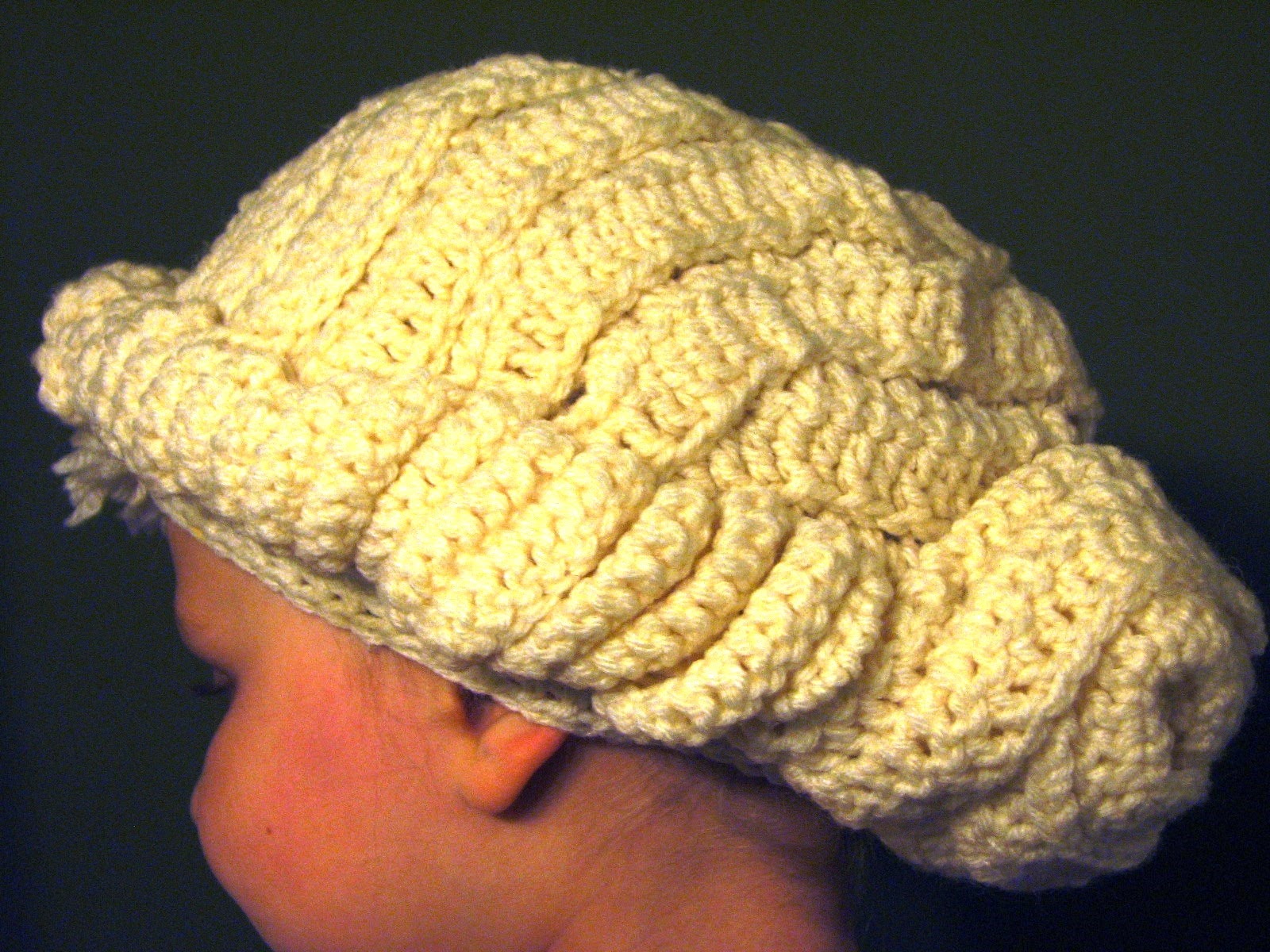 I am so excited that the design of Elsa's coronation hair inspired hat is DONE! Yes, the crown isn't gold as in the movie, but it does fit Elsa's blue color scheme in other scenes.  I did a lot of market research and found many commercial suppliers promoting their own silver & blue products, so it seemed the most logical.

My little princess loves the hat.  Even though she knows it's for someone else, she's tried playing dress-up with it a few times.  She has already requested her own for Halloween.  I take that as a good sign.

It's elating to see my vision for the Elsa hat come to life.  It was also very rewarding to see the look on my daughter's face when she saw it for the first time.  That's validating enough for me!

UPDATE (10/29/2014):  I sold the first hat of this design to a lovely customer whose daughter was dressing as Elsa on Coronation Day.  Her little girl has a short bobbed haircut, so this hat was perfect for her to tuck her hair inside.  Her mama explained that she had looked everywhere online for a hat like this, and mine was the only one she found.  When I created this hat, I had this exact thought in mind.  My hope was that someone would find and appreciate it for its artistic value, and it turns out that someone does.  I am so glad to have designed this hat and that it found its way to a precious little girl to enjoy.  My cup overfloweth.  <3

If you're interested in having this hat made for your child or yourself, just visit my Etsy shop.  I also have available an Elsa Snow Queen hat if this style doesn't suit your preference.

Thanks for stopping by and reading my blog!
Posted by yarnie_foodie_momx3 at Sunday, September 21, 2014