My daughter loves many Disney princesses, but one of her most favorite is Rapunzel from "Tangled". And why not?  Long, flowing magical locks and the voice of an angel--what's more to love and build a little girl's whimsical imagination?

I remember myself as a child, being fascinated by the Brothers Grimm rendition of Rapunzel and her long, silken locks. "Rapunzel, Rapunzel, let down your hair, so I may climb the golden stair!"  The Disney portrayal vastly differs from the original "grim" tale, but I'd much rather have my daughter enamored with the latest romanticized tale than the original one of gruesome grief and woe.

Anyhow, back to my original point...  On my girl's Christmas wish list last year was a Rapunzel dress-up outfit.  I found the perfect purple gown and shoes right away.  However, I searched in vain for good quality dress-up "hair".  Everything that surfaced in the commercialized world was either cheap-looking, or I knew would be tangled into a snarly mass by my then four-year-old within a matter of minutes.  So... what was the crocheter in me to do?  Create one myself, of course!

For weeks, I worked my fingers and crochet hook to create the finishing touch to her Christmas surprise.  I worked on it every spare moment: while waiting for dinner to cook, from the kids' bedtime until midnight every night and even at work in the staff break room (which was probably the least productive venue because everyone kept asking what on earth was I making, and I had to show and tell each time).  I worked on it until my fingers were numb and cramped, and my eyes squinted and strained.  It was the most rewarding work. The whole while, I imagined the expression on her little face when she opened her gift.  It's possible that I may have been more excited than she to open it!

On Christmas Eve, Rapunzel's hair was almost done.  All I needed to do was sew each flower into the braid.  By midnight just as "Santa" (aka hubby) finished wrapping all the other gifts, it was done--my masterpiece for my baby girl! 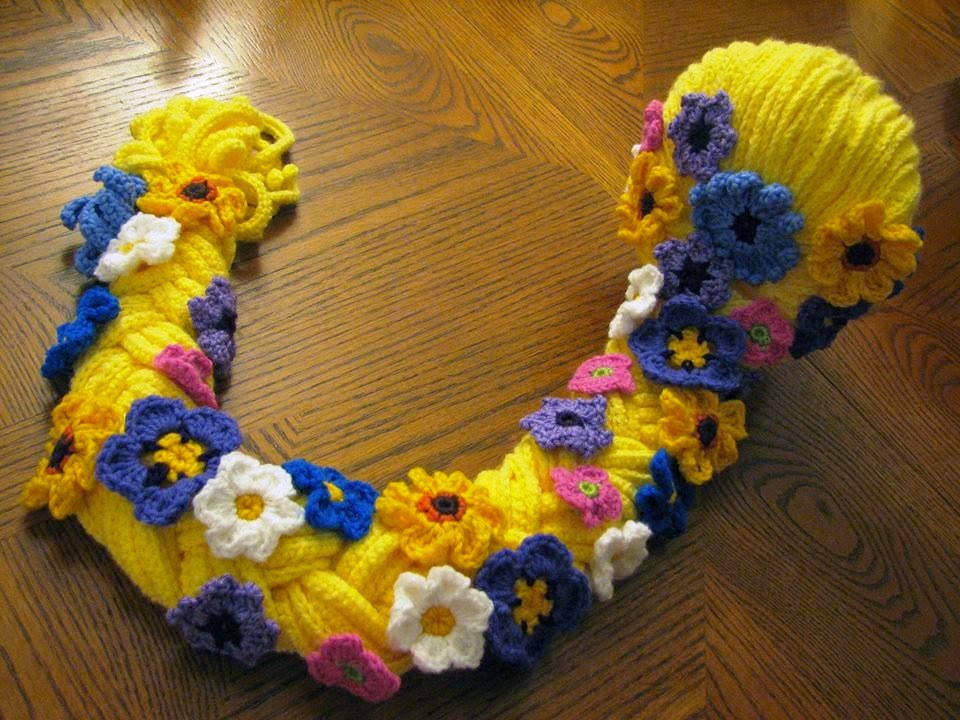 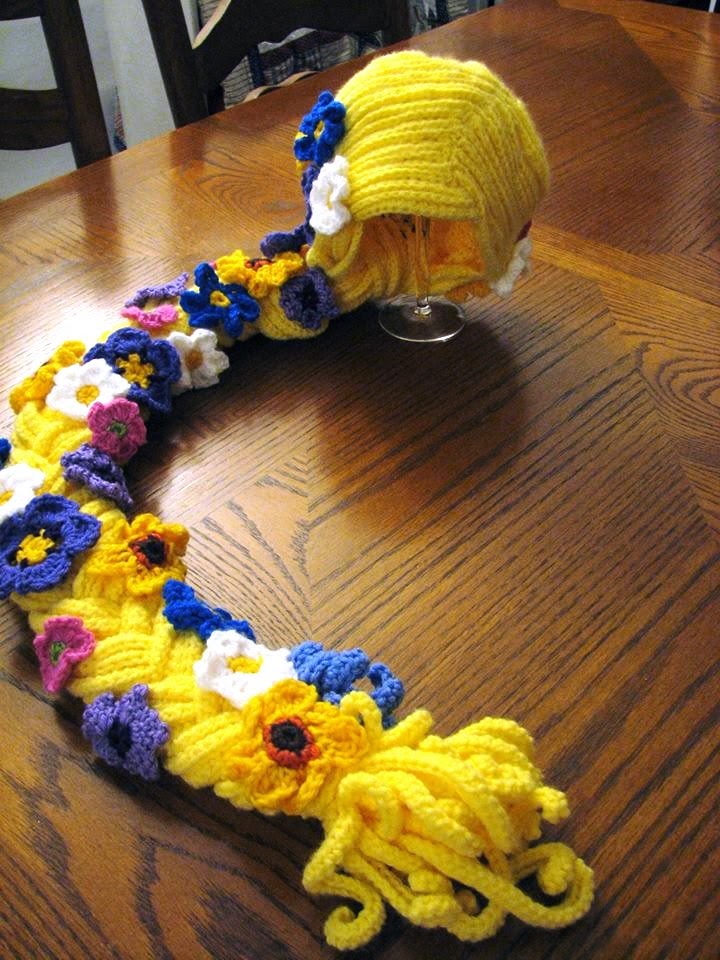 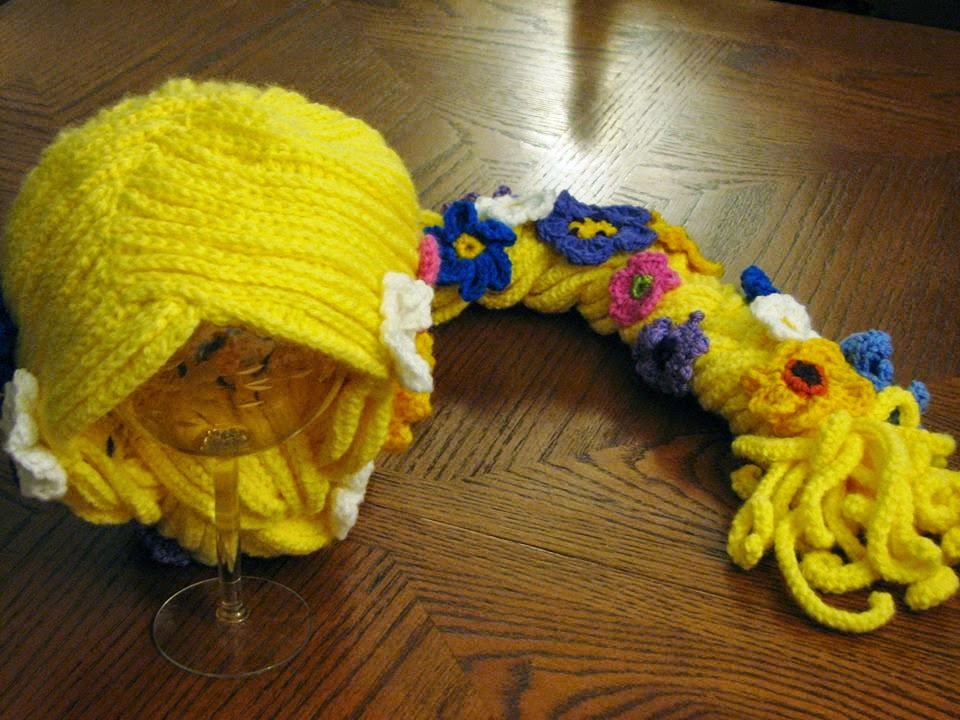 Just look at her face!  She was SO HAPPY! 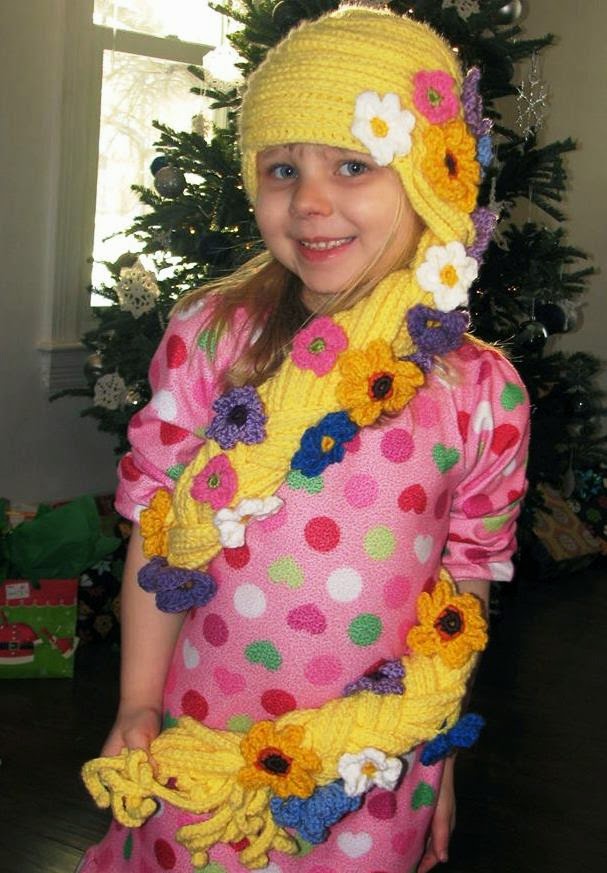 Some have asked if I would ever make another hat like this, and I have quickly responded, "No", each time.  There are just some projects that you only make for family because they're so much work. They are a labor of love, in a sense.  However, when I remember the excitement that streamed across my little girl's face when she first tried it on and flitted about the house, it does give me a twinge of desire to give the same enjoyment to another little girl one day.

Hmm...  I might reconsider someday.  Maybe if the mood strikes... Who knows!
Posted by yarnie_foodie_momx3 at Wednesday, September 17, 2014